Congratulations to Zab Mboungou and the announcement of the 2021 Lifetime Artistic Achievement Award!

Zab Maboungou is the founding artistic director of Zab Maboungou / Compagnie Danse Nyata Nyata, a Montréal-based contemporary dance company. A pioneer of dance in Canada, she is known for intensely physical, dynamic works that explore the capacity of movement to express what she calls “our situation in the world”. She has created more than 20 dance works, and her movement technique, LOKETO—a contemporary approach that draws on the rhythms of traditional Central African music and dance—has become a model of its kind. She has achieved international recognition in the fields of arts, research and education, and her contributions as a choreographer, dancer, instructor, philosopher and writer continue to enrich the collective discourse on art and cultural diversity. 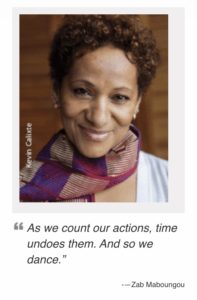 Born in France and raised in the Republic of Congo, Ms. Maboungou became interested in dance through her childhood contact with traditional dance and music groups, among others. She has performed with various dance companies and studied with masters of African dance, integrating their teachings into her novel approach to choreographic movement.

Her solo piece Incantation (1995), her most recent solo, Wamunzo (2018), and the ensemble piece Mozongi (created in 1997 and remounted in 2014 to mark Nyata Nyata’s 25th anniversary) have had a particular impact on the art of dance. She developed a dance training program, PEFAPDA, and her dance technique, LOKETO, is its touchstone: it invites participants to explore the art of movement on a physical, mental, rhythmic and aesthetic level.

As a professor of philosophy, Ms. Maboungou brings a unique theoretical dimension to the field of dance. She has written several articles on dance as well as a book, Heya Danse! Historique, poétique et didactique de la danse africaine, and she is a sought-after speaker on art and knowledge.

Zab Maboungou is a Companion of the Ordre des arts et des lettres du Québec. Her other accolades include the Charles Biddle Award; the Martin Luther King Jr. Achievement Award from Montréal’s Black Theatre Workshop; and the 2020 Dancer/Company of the Year award at the Dynasty Gala, which celebrates excellence in Quebec’s Black community. Nyata Nyata received the inaugural Envol Award for cultural diversity and inclusive practices in dance (Conseil des arts de Montréal/CAM); the company was shortlisted for the CAM’s 30th Grand Prix in 2015 and was named Dance Laureate 2015 for the power and depth of Mozongi.